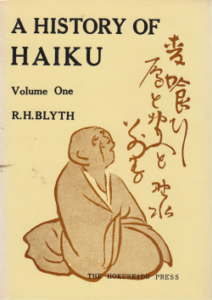 Ondertitel : From the beginnings up to Issa
Uitgeverij : The Hokuseido Press
Jaar : 1963
Aantal pagina’s : 427

This volume, the first of two, traces the history of haiku from its beginnings in renga to the uncertainties of present-day haiku. Haiku are not very amenable to a chronological treatment. Haiku are moments of vision, and the history of moments is hardly possible. If we were to choose verses which are typical of each poet, it would not ne so difficult to make out some sort of development, but if it is the best verses we select, there must a sameness thoughout, a more or less constant level of excellence in which it is difficult to distinguish ne writer from another.

A compromise has been effected by choosing the best of as many writers as possible, thus illustrating the ups and dwns of haiku history. The religious naturalism and profound simplicity of Basho, the versatility of Buson, the artfully artless art of Issa, the objective dryness yet pregnancy of Shiki, and the decadence of all later writers is thus not obscured. A fair number of not first-class verses being inevitably included, the reader, making a virtue of necessity, may actually learn more about the nature of haiku by considering the failures and near-hits rather than the successes.

The six volumes include almost all the best haiku up to, say 1920, and a number of the best beyond this point. Someone should go to the immense trouble of harvesting the forty odd years between then and now, but speaking personally, and therefore somewhat violently, I feel that very little would be lost if all the haiku of modern times were tacitly forgotten. The world, of which Japan is a part and a microcosm, has set for itself goals totally different from those of Basho. His Way of Haiku can hardly be said to exist now, for almost nobody walks on it. As a Way, it was in many respects better that that of Taoism, Christianity, Confucianism, Buddhism, and so on. Its desuetude is a monument to the stupidity, vulgarity, sentimentality, and unpoeticality of human beings. It makes us view their possible total desctructin with equanimity.