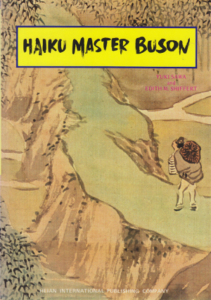 The warrior
continues on, brushing off dewdrops
with the end of his bow!

Tekst binnenflap boek
The Japanese have many artists, many poets, and many religious personalities in their history. The influences on them can be traced, but it is the poetic form of haiku that is best suited to trascend the categories of modernity and classical, and it is Japanese poetry that captures the western artist who is drawn to the calligraphic style of Japanese creativity.

It is difficult to measure the influence of haiku on western literature. One major contributor is Buson, an eighteenth century haijin; he was a poet, a painter, and a religionist. This representative work of Buson in English is one of the few significant contributions to the study and appreciation of the genuine activity of the practising poet as it is lived and felt in Japanese literature.

It is obvious why the translators chose to investigate this poet. Their compilation includes prose and poetic translations of Buson; their essay contributions place the important of haiku in one’s life and implies an approach for western readers in the pursuit of a poetic way in “seeing”. Haiku was become important to many readers of diverse languages. The haiku form, well known and internationalized, contiuously needs studies of this kind for the poetic world to expand and deepen man’s contemporary mind and spirit.